Partly thanks to the introduction of a large number of new bamboo species during the last century, there has been a need in Europe for exciting combinations with other exotic plants, in particular with palms, ornamental ginger and garden bananas. Almost every bamboo-enthusiast now has at least one mountain banana in the garden. In popular parlance, gardens with such plant combinations are mistakenly called “tropical gardens”, but we know better. Tropical plants usually do not survive in our climate. It is mainly plants from mountainous regions in subtropical climate zones that are of interest to us. Fortunately, mountain bananas have the appearance of tropical bananas, and will enhance the “tropical feel” of your bamboo garden. Since the introduction of the now established garden banana  [en prod=”Musa basjoo“]  new species are occasionally arriving here in the west.

Musa sikkimensis entered our gardens under the name Musa hookeri. This species from North India and surrounds is considered even more beautiful by many than  Musa basjoo . The “Red Tiger” shape with a red-purple mark on the young leaves is frequently to be found. Sadly, Musa sikkimensis will usually not survice a Dutch winter without extra protection .. this in contrast to the indestructible [en prod=”Musa basjoo“]! So here’s my protection technique for your sensitive bananas:
As early as September / October I start by applying a 20 cm thick layer of chopped branches (This may also be other organic, airy stuff such as straw or pine bark). This layer protects and stimulates soil life and slows down the cooling of the soil.
As the temperature drops, scattter all garden waste that normally goes to the compost heap around and between the banana trunks. By the end of the year, this protective layer should be more than 150 cm high. Only when the banana leaves have turned brown from the first night frost, do I cut them off and cover the top part with a tarpaulin or an old big-bag as shown in the photo below. The banana is then covered with pile of compost. This heap ferments a little, generating heat and ensures that the (pseudo) stems of the banana do not freeze.
The heap can be held together with mesh or pallets if necessary. The tarpaulin is important to keep the banana dry, because then the plant can tolerate low temperatures better.
In the spring, the tarpaulin is removed in mild weather, and as the temperature rises, the compacted compost is raked away. During the first summery days, the banana is completely exposed again so that the soil can warm up. Any rotten parts are cut away. Usually, new growth starts from the core of the trunks. 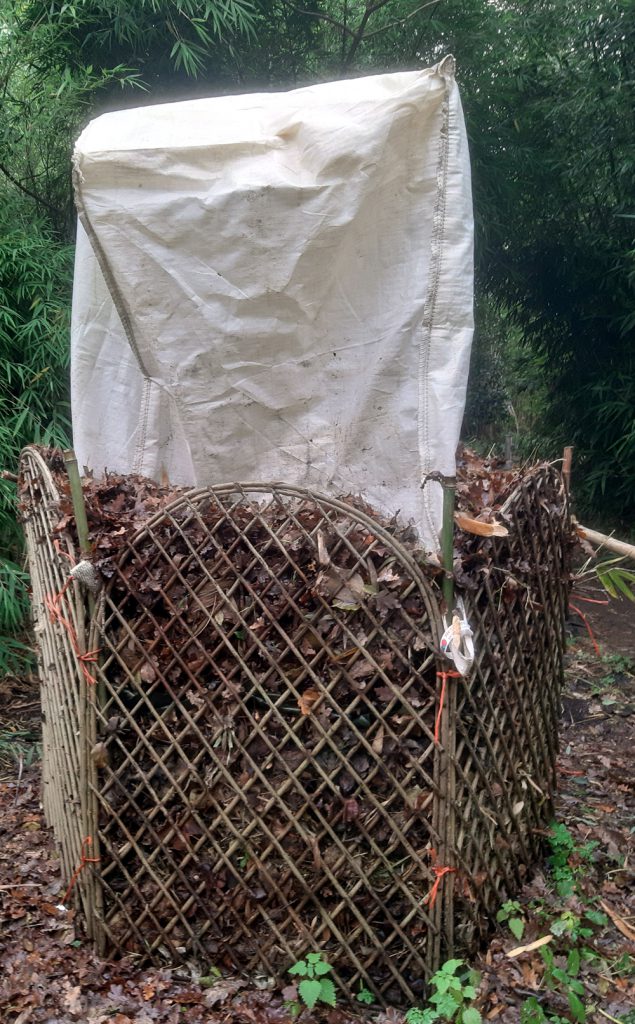 Let the winter do its worst!

Tissue culture (= propagation in the laboratory)

Thanks to tissue cultivation, which is quite easy with bananas, garden bananas are being “put on the market” in large numbers. For example, the dwarf banana Musella lasiocarpa suddenly arrived onto the market in huge quantities (tissue cultured) in the plant trade. This species with long lasting yellow inflorescences is difficult to get through the winter in the garden and is better grown as a container plant.
Sometimes tissue culture doesn’t work very well. The natural growth habit of wild bananas can be lost and flowering decreases. For example, Musa basjoo ‘Sakhalin’ plants have become somewhat sensitive to fungus, its leaves are less beautiful and they produce an unusually quantity of side shoots. The original basjoo – the primal form – behaves much more naturally in my garden and comes into bloom!

Other garden bananas for the open ground 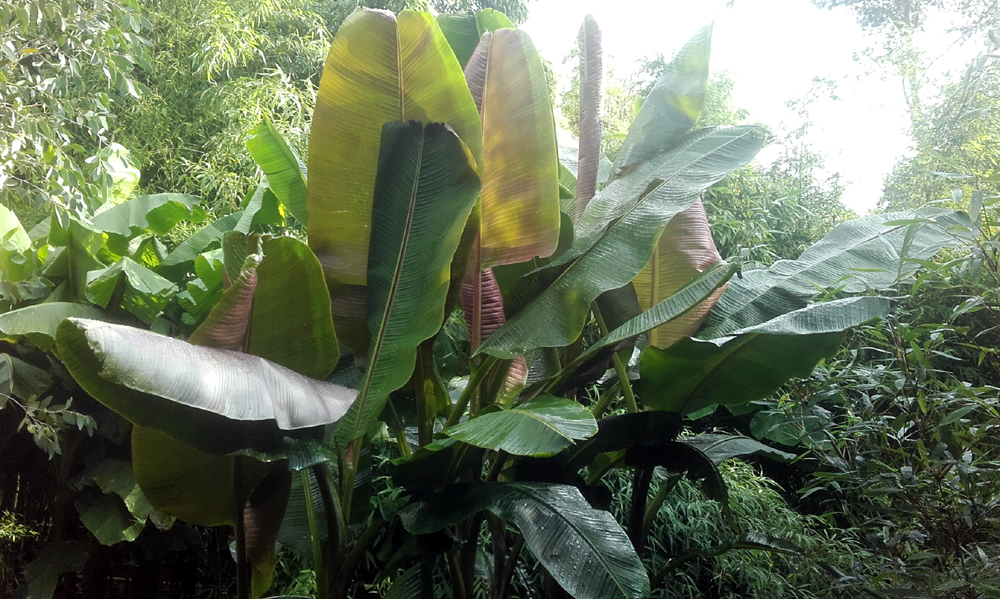 A lesser-known garden banana can now be found by enthusiasts under the name Musa sp. Yangtse. This strain is said to be even stronger than Musa basjoo. This banana is probably not a form of Musa yunnanense as some believe and grows very well in the garden. Its origin is the Burma-Tibet-Yunnan border region at an altitude of 2800m in the valley of the Yangtse River.  In my garden I limit myself to trying out the natural varieties not from tissue culture. But plants that come from banana farms are almost always from laboratory propagation. According to information from an experienced tissue grower, the process in the lab should actually produce healthier and stronger plants because the result is free of bacteria, viruses and fungi. There is also scientific evidence for this on the net. But the resistance to disease must then be rebuilt.

The above garden bananas are all ornamental bananas. For now, I am still dependant on the supermarket for edible bananas (I eat at least 5 a day)!

And now .. the burning question:

The mountain bananas below may produce edible bananas in our country in a cold greenhouse (data taken from botanical garden “A l’ombre des Figuiers”):

Musa sp. Dhusray frost-resistant to -10/-12°C, has been tested with plenty of winter protection in the garden. Import from Kalimpong, N. India; Actual frost tolerance has yet to be tested. Unfortunately, it did not survive the winter of 2016/2017 in the cold greenhouse.

Musa sp. Hajaray hybrid Produces excellent sweet bananas. The rhizomes have proved hardy to a minimum of -10/-12°C, making it suitable for outdoor cultivation in the milder areas of France, but with winter protection. Unfortunately, it did not survive the winter of 2016/2017 in the cold greenhouse.

Musa sp. Malbhog (form of Musa paradisiaca) produces blunt, golden yellow bananas that are half the size of Musa Dhusray but more nutritious. The rhizome is said to be hardy at a minimum of -10/-12°C, which makes it suitable for outdoor cultivation in the milder areas of France, but with winter protection. Import from Kalimpong, N. India. Actual frost tolerance has yet to be tested. Did not survive the winter of 2016/2017 in the cold greenhouse.

Musa Chini Champa Survived in a cold greenhouse and was planted outside in the spring of 2017. Is the most colourful variety with sweet bananas. With a lot of winter protection in the form of bubble wrap, it survived the winter 2017/2018 and is currently (May/June) sprouting with new shoots. Will hopefully be limited available again in the summer of 2021.

Musa Rajapuri According to US sources, a good banana for cooler areas. Was therefore planted in a cold greenhouse in 2017. But it unfortunately didn’t survive and is clearly more sensitive than other mountain bananas, possibly due to being propagated in a laboratory.

The frost limit that is indicated does not say much about the applicability in our gardens. When the first night frost comes, the leaves freeze – regardless of the extent of the frost. Unprotected pseudostems freeze from about -5 ° C, but also in less cold conditions if it continues to freeze during the day. The rhizomes are deep in the ground and can make new shoots in the spring, regardless of whether it has been -10 or -20°C above the ground- unless the frost has penetrated the soil to the extent that the rhizomes have frozen. Hence the importance of an extremely thick layer of mulch around the plant!
Also important is to situate in a very sunny spot, preferably in front of a south wall of a house, because here the temperatures are slightly higher than elsewhere in the garden. And of course a rich soil and sufficient moisture and nutrition during growth is necessary, so that the banana is healthy and therefore strong. But that goes without saying!

The ripening process for bananas takes 75 to 80 days in the regions of origin. In our gardens I estimate a minimum of 3 months. So if flowering starts late in the season, don’t expect any more ripening outside. Hopefully, among the edible bananas there are also varieties that flower early. I am hopeful: thanks to geothermal energy, even in Iceland bananas have been grown in greenhouses since World War II despite the long dark winters!

The naming of bananas is quite chaotic and controversial … and not really interesting or relevant for this article. A lot of information can be found on the internet. The site below provides more information:

This banana was ordered as Chinichampa, but turned out to be a Rajapuri. Mistakes are sometimes made when importing from Asia!